Through a combination of innovative technology, like the da Vinci® Surgical System, cutting-edge medical knowledge and sincere dedication to our patients, Timpanogos Regional Hospital remains a leading provider of quality surgical services in Utah.

If you would like to speak with a Timpanogos surgeon trained to perform robotic surgery, please call (800) 848-4652 for a physician referral.

The da Vinci® Surgical System is a robotic surgery platform designed to enable complex procedures of all types to be performed through one to two centimeter incisions or operating "ports." To date, our Orem surgeons have performed hundreds of procedures including general, urologic and gynecologic procedures at Timpanogos Regional Hospital using this minimally invasive surgery technology.

At Timpanogos Regional Hospital in Orem, this state-of-the-art robotic technology increases surgical choices for patients and their physicians. Integrating computer-enhanced technology with our surgeon's experience and skill enhances healing and promotes a full recovery.

When using the da Vinci® Surgical System at Timpanogos Regional Hospital, the surgeon sits at a console in an operating room—only a few feet away from the patient. He or she is guided by vibrant, 3D images that magnify the surgical site. This allows the surgeon to more clearly see the patient's internal organs, as well as vital nerves and blood supply surrounding the organs. 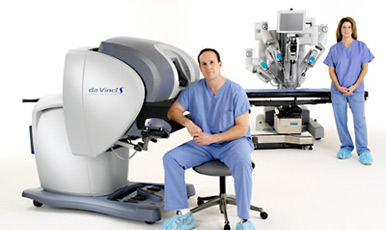 At the console, our surgeons use hand and foot controls to precisely manipulate each of the robot's four arms and the tiny surgical instruments they hold. The robotic surgical technology enables surgeries to repair or remove diseased organs with minimal trauma to the patient's body.

It is important to note that the robot cannot be programmed, nor can it make decisions on its own. Our surgeons always remain in the operating room during entire procedure, close by their patients. These specialists utilize the surgical system to perform several different types of procedures. We frequently perform hysterectomy, prostatectomy, nephrectomy and acid reflux surgery using the da Vinci® Surgical System.

Physicians perform hysterectomies to treat a wide variety of medical conditions, including uterine prolapse, endometriosis and uterine fibroids. There are three approaches to a hysterectomy—traditional open surgery, laparoscopic and robotic-assisted. 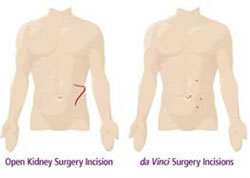 Kidney function is critical to life because the organ filters wastes and fluid from the bloodstream. The removal of the entire kidney is called a radical nephrectomy. Another surgical option, called a partial nephrectomy, aims to remove only the diseased part of your kidney and spare the healthy, functioning kidney tissue. Nephrectomy is also used to remove a healthy kidney that will be transplanted to another person.

Nephrectomy is most commonly performed on patients with cancer or patients whose kidney has been severely damaged by infection, kidney stones or cysts. With da Vinci® nephrectomy, there is increased potential for kidney preservation in certain prescribed cancer operations.

The da Vinci® prostatectomy is one of many treatment options for men facing prostate cancer. Besides surgery, other treatments include radiation, cryotherapy, hormone therapy and watchful waiting/active surveillance. Recent studies comparing surgery to radiation, found that surgery to remove the cancerous prostate resulted in the lowest cancer death rate.

Gastroesophageal reflux disease (GERD) is a common disorder in which food or liquid travels backwards from the stomach to the esophagus. GERD is often chronic, which means that once you develop this condition, you may experience recurring episodes for the rest of your life.

Anyone, including infants and children, can have GERD. GERD irritates the esophagus, causing heartburn and other symptoms, such as:

If you have these symptoms more than twice a week, you may have GERD and may be a candidate for a surgery called Nissen fundoplication using the da Vinci® Surgical System. When left untreated, GERD can lead to serious health concerns. Nissen fundoplication is a surgical procedure used to treat severe GERD when medications and nonsurgical treatments do not reduce symptoms.

Retrieving location data...
Use my location
Or Use My Location
List Map